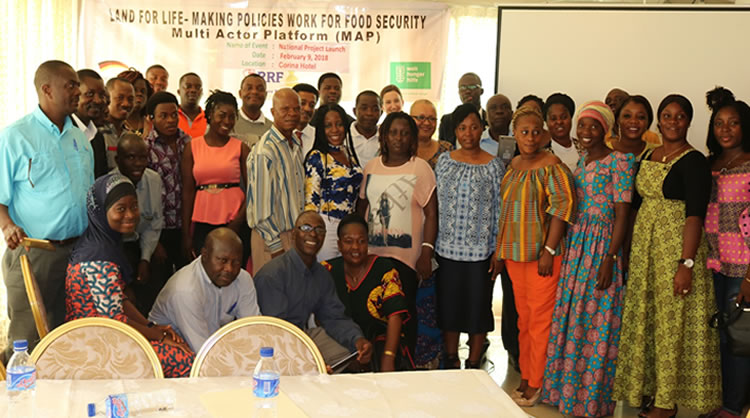 Monrovia – The race for land ownership is one of big issues in Liberia that has been engulfed with multiplicity of problems ranging from insecure land tenure forms and rights; lack of land use database for state, private, and customary lands; weak land administration and management; inadequate concession practices and protective mechanisms to prevent “land-grabbing” amongst others. These issues are causing serious problems for communities’ dwellers to get land for making their farms particularly in rural areas.

On February 9, Welthungerhilfe (WHH), in conjunction with several Civil Society Actors, launched a Multi-Actor Partnership (MAP) on land governance in Liberia at the Corina Hotel in Monrovia under the title “Land for Life – Making Policies Work for Food Security”.

WHH is supporting rural farmers to grow food for Sustainable Food and Nutrition Security (SFNS) in the South-East of Liberia but this can only be achieved when farmers have access to land. Community Based Organizations (CBOs) and Civil Society Organization (CSOs) strongly believe that the passage of the Land Rights Bill by the national legislature is cardinal to solving land conflict and accelerate community development.

Since 2014, Civil Society Actors have been advocating at the national legislature for the signing of the Land Rights Bill which when passed, will give communities ownership to their land. In 2017, the houses of representative signed the bill but not in its original form, as several important clauses were either omitted or revised. This version of the bill is currently in front of the house of senate for concordance.

MAP is a two-year pilot project funded by the German Ministry for Economic Cooperation and Development (BMZ by its German acronym) whose aim is to establish platforms that will bring together all relevant stakeholders under a collaborative umbrella to contribute towards the formulation and implementation of policies on land tenure systems and responsible agricultural investments that are consistent with the human right to adequate food. Institutions represented at the launch event were: Forestry Development Authority (FDA), ArcelorMittal, Carter Center, Samdiabe rubber plantation and Sustainable Development Institute (SDI) amongst others.

The lead partner implementing MAP in Liberia is the Rights and Rice Foundation (RRF), a major partner of WHH on land governance and one of the co-conveners of the National Civil Society Organization Working Group on Land Rights Reform in Liberia; a coalition of over 18 CSOs.

Given the difficulties for farmers to access land in their quest to fight against hunger and poverty in Liberia, the platform will allow multiple actors to use complementary expertise, strength and abilities to address key issues about land governance through collaborative efforts.

Like Liberia, the MAP project is also being piloted in Sierra Leone, Ethiopia and Burkina Faso under the monitoring eyes of Welthungerhilfe Headquarters in Germany.

As part of initial activities to start the MAP project in Liberia, Welthungerhilfe and its local partner, RRF have being conducting a three-day capacity building workshop for CSOs, CBOs and other Civil Society Actors in Gbarnga, Bong County.

This article was originally published on LandPortal.

„Our lands – our rights!” – Workshop in Bo, Sierra Leone