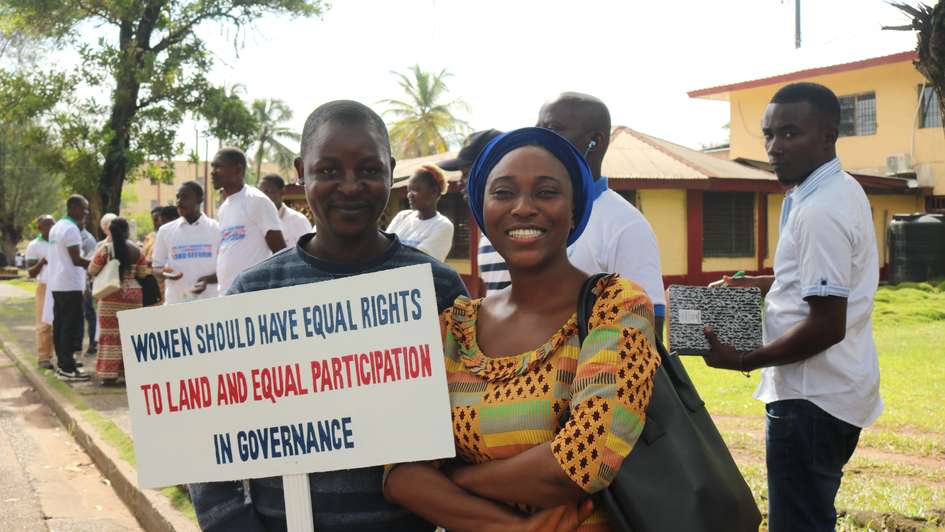 A win for the people: Liberia’s reworked land rights bill is a big step towards peace and greater nutrition security. For the first time, civil society was actively involved in shaping the law.

Good news from Liberia: both the lower House (house of representatives) and the upper House (The Senate) have just passed one of Africa’s most progressive land rights bills. For a country whose majority of the population depends on agriculture, this is a big step forward towards peace and food security. Many smallholder farmers have not been allowed to own their own land and have had to live at the mercy of corrupt landowners. One of those farmers is Edwin Saye.

In Liberia, like many other countries, land rights have been a source of conflict. Land issues contributed to the devastating Liberian Civil War (1989 – 2003) and, though the conflict ended fourteen years ago, security of tenure has not been achieved for most rural dwellers. The country’s land-tenure system reflects a long-standing division between the urban elite and rural indigenous populations. Urban land rights are governed by a Western statutory system. Rural communities – which, according to the Sustainable Development Institute (SDI), make up 85% of the country’s population and largely practice subsistence agriculture – use their own customary systems. However, most customary land is not titled, and the state owns by law all land not secured by a deed. The government recognises rural people’s rights to use this land, but not to own it.

Working together for a just land tenure system

It is hoped that the new land rights reform will correct the old unjust land tenure system. Until now, many Liberians have lost their land due to land titles being granted to foreign investors. “When foreign investors wanted to buy land, they only discussed and negotiated with the government and not the communities, who are the real owners,” explains Alphonso B. Henries, representative of the Civil Society Organization Working Group on Land Rights. He has been working with another 50 people to put pressure on Parliament to pass the new law, which could now have positive consequences for thousands of Liberians, if not all of the 4.1 million citizens.

The Civil Society Organization Working Group on Land Rights Reform in Liberia, made up of more than 30 civil society organisations, has been scrutinising the land reform process over the past years and met with the members of the Senate to critically review this bill and shape its outcome. Thanks to joint efforts by a number of groups and institutions, the newly passed bill takes into account 95 per cent of their demands, for example all concessions and land-based investments now require the “Free, Prior and Informed Consent” of the affected community. Welthungerhilfe, through a specific Land Rights project, provided the civil society organisations with training, networking, advocacy and information sharing skills and has thus contributed to this great success.

For a peaceful Liberia

Apart from the direct interference with people’s livelihoods, the old unjust land tenure system had caused a ripple effect: With more and more communities forced out of their areas and competing for land, conflicts between different ethnic groups intensified. The reworked land rights bill gives hope for a peaceful future. The next challenge is to put the new bill into practice and to help Edwin and many others to get their own land title.

This success driven by a vibrant civil society is not only good news for Liberians, but it can also serve as a reference and as an example for other nations fighting for better rights.

This article was originally published on Welthungerhilfe.