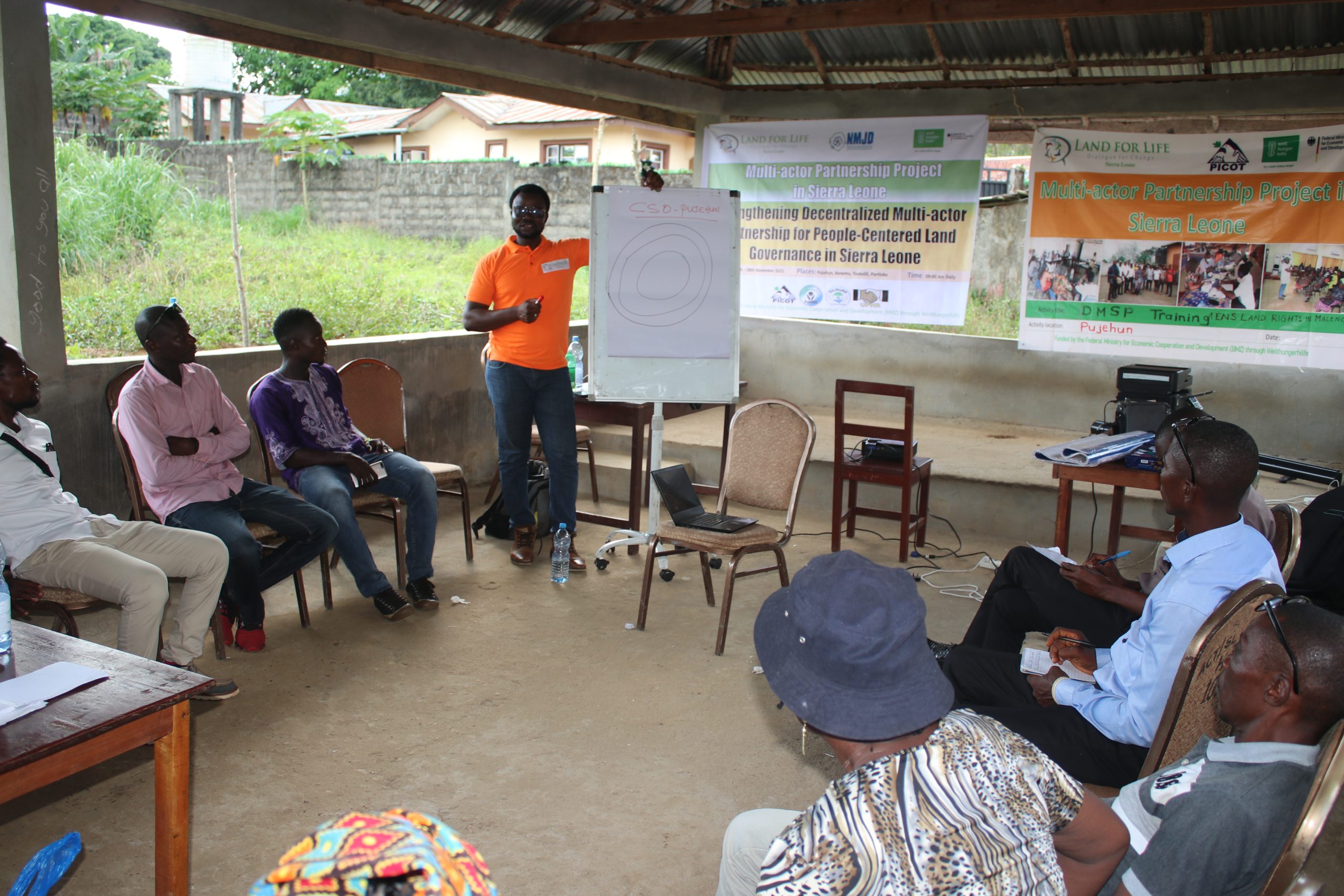 “Two roads diverged in a wood…and we chose the one less traveled by,” said Abu Brima, Executive Director of Network Movement for Justice and Development (NMJD) and National Convener of the Land for Life Initiative Sierra Leone, as he officially opens a two-day Land for Life consortium quarterly meeting. According to Mr. Brima, Civil Society Work in Sierra Leone entails a great deal of responsibility, particularly in ensuring that land governance problems are championed against all odds and hurdles. He emphasized that the path the consortium has taken in Sierra Leone in advocating for the less privileged is less traveled by many CSOs in the country.

Sierra Leone is currently grasping with several options to make its land sector better and Land for Life is caught in action working with several other stakeholders to achieve the desired change. The Initiative which is rolled out by a Consortium of four CSOs strategically located in the four regions of the country, does have a quarterly planning meeting during which members take stock of gains made in the previous three months, identify challenges encountered, record learnings and plan for the next period.

During the Bo-Southern Sierra Leone meeting, updates from both the national level Secretariat and decentralized level partner organizations, indicate that steady progress is being made.
At the national level front,  Berns Komba Lebbie, National Coordinator for the Land for Life Initiative Sierra Leone, stated that the Initiative has been working with other CSOs in Freetown to engage the appropriate institutions, including the administration of Parliament, the Ministry of Lands, Housing and Country Planning and development partners – FAO, World Bank, etc.,  in turning Land Right Bills into laws. He also referenced that the Technical Working Group which is a governmental multi-stakeholder platform rolling out inclusive land governance, has been playing a critical role in the ongoing reform process.

“The establishment of the Technical Working Group (TWG) was initially intended to lead the VGGT implementation in Sierra Leone. But its mandate has been expanded to now provide an inclusive multi-stakeholder support to government and development partners, as affirmed in the end-of-year retreat” – Berns Komba Lebbie

He affirmed that the German Government through FAO is the key international partner supporting the work of the TWG, but that other technical supports are coming in from other actors, including World Bank.
The Land for Life decentralized level engagement is led by district facilitators as frontiers in each of the operational districts. Their main role is to empower communities, identify land conflict indicators, and collect relevant information from the communities to inform higher-level stakeholder decisions.

In Tonkolili, the District Facilitator – Ibrahim Mansaray – stated that there was significant progress in the behavior of the investment company – Miro Forestry Limited in terms of their land acquisition method and their willingness to strengthen community relationships. He said the company had recently allocated about 30,000 seedlings to support community participatory tree planting as part of their out-grower scheme initiative.

The Partners Initiative for Conflict Transformation (PICOT) is rolling out Land for Life in the Pujehun district where Socfin Agricultural Company (SAC), a subsidiary of the Socfin Group located in Sahn Malen Chiefdom, has a concession of 18,473 ha and a plantation of 12,349 ha of oil palm and a mill of 30 T/h with one biomass boiler.

He also said that Land for Life intervention has contributed to reducing tension in the investment communities, but does not mean an end to the serious community concerns against the company. He explained that SAC is seen making some efforts to mount a land information campaign aimed at educating landowners about the security of their land boundaries on a GPS map. He however indicated that MALOA, a group of landowners and users, has continually raised concern against the recent RSOPO certificate which SAC has gained, questioning the audit process.

“MALOA are not satisfied with the RSPO group for certifying Socfin and have called on their members to sign a petition against SAC and RSPO. Meanwhile, another faction of landowners in the same chiefdom called Hopanda (hold responsibly), are in support of Socfin’s operations and have not questioned the RSPO certification process” – Aiah Charles Jabba

In Port-Loko where the United for the Protection of Human Rights (UPHR) is rolling out Land for Life’s work, updates indicate that there are several layers of confusion about the ownership and operations of a Sierra Organic Palms (SOP) that took over palm oil cultivated by the Sierra Leone Agriculture – which later lost the concession to the landowners through a court action. It is indicated that SOP has sold the concession to a new company called Rewinding Africa. But the confusion identified is that both entities are represented by the same management and that some information indicates that there was only a concession sharing and not a total transfer of owners.

Meanwhile, Land for Life, Green Scenery, and other CSOs have earlier questioned the transfer process of the consession to SOP which they say didn’t follow due process and was characterized by several misrepresentations.

‘We hold the view that the concession belongs to the Burreh, Kasseh and Maconteh people as they won a case against the company that cultivated the plantation. Should any new company want to take over the ownership, the agreement should show that the company is taking over a cultivated concession and should be committed to a profit-sharing agreement instead of a land lease agreement’ – Berns Komba Lebbie

Overall, the work of Land for Life is gradually taking a noticeable space as its dialogic approach is being proven as a sustainable way to change in the land sector. The meeting also gave an opportunity for new workers to familiarize themselves with the rest of the team members. 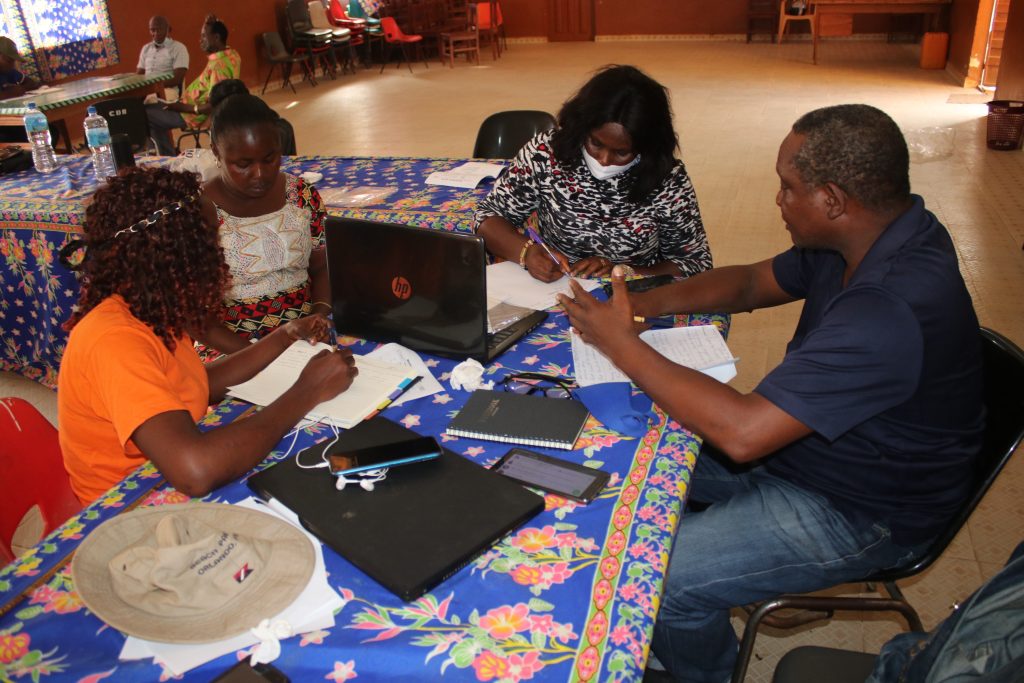