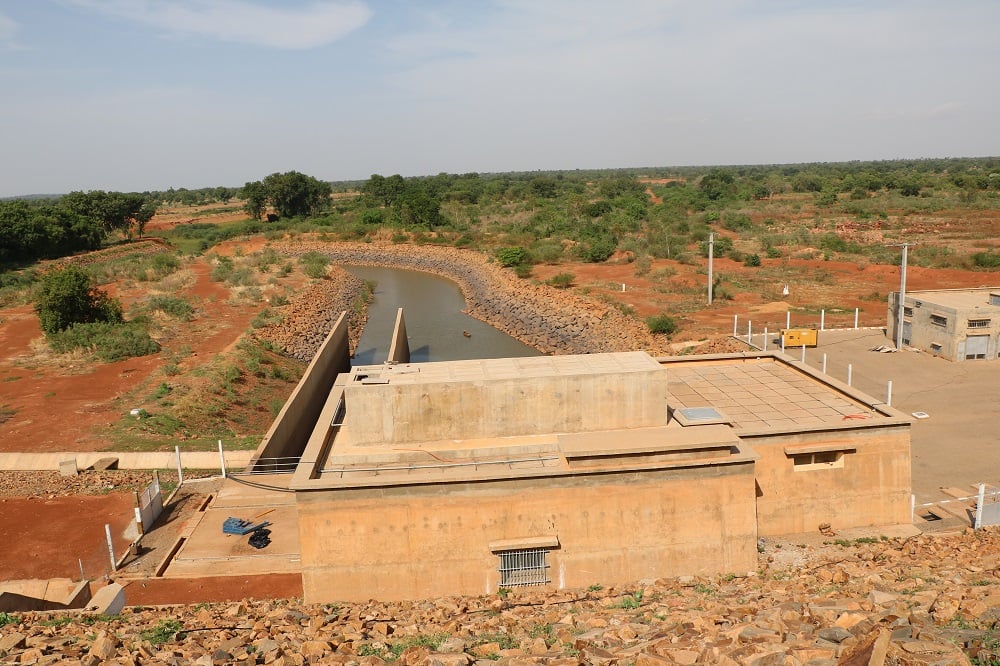 by Miriam S. Onadia, original articles on Burkina 24 and Ouest-Info.

Built on the Mouhoun River in the department of Bama, the Samendeni dam has a storage capacity of 1,050,000,000 m3. It has a hydroelectric power station with an annual production of 18 GWh.

With an estimated cost of 61.687.917.293 CFA francs (94.000.000€), this dam will contribute greatly to the socio-economic development of Burkina Faso. It is also planned to build a hotel next to the lake of the dam and to develop a commercial fishery all year round. Furthermore, it is planned to develop hydro-agricultural activities of about 21.000 hectares for nearly 100.000 jobs, 2% of the GDP and 3% of the national grain production.

However, as one can imagine, the development of this promising project is not without difficulties. It required the displacement, relocation, and compensation of 7 villages with its thousands of households. According to the Samendeni Valley Integrated Development Program (PDIS), all measures have been taken to better relocate the population affected by the construction of the dam. Nevertheless, the latter is grumbling and accusing the PDIS of not having kept its promises.

To better understand the process of these displaced people, Land for Life organized a press trip with its media pool on the spot from the 18th till 20th of May. The team was able to speak with the inhabitants of Mangafesso, a village that has been recolonized on a site developed by the PDIS and visited the dam. A face-to-face meeting also took place between the media pool and the PDIS.

The subjects of dissatisfaction of the populations

At Mangafaisso, one of the ten new host sites developed not far from the Samendeni dam, the populations deplore the lack of land. “On this new site, the land is not as fertile as before. In addition, some people are obliged to spend between 15.000 and 20.000 CFA francs (23-30€) to rent cultivated areas,” says Salam Sanguié. Djema Traoré who used to grow vegetables. But on this new site, he is facing enormous difficulties due to the lack of water. “My garden was on the edge of the marigot. But here there is no water point where I can settle down to continue my planting activities. Even the water to build our houses is difficult to find”. The village chief added that he has lost a lot of land.

As for Traoré Mariam, she appreciates the achievements on the site. “Thanks to PDIS, we have access to drinking water, electricity and our children go to school. What I ask PDIS is to help us with credits so that we can carry out income generating activities. In my village, I used to sell peanut legs. This could bring me about 300,000 CFA (460€) per year. But here I can’t manage.”

However, according to many inhabitants of Magafesso, the PDIS has not kept its promises because they have heard that the program should offer each affected and registered household a turnkey house, a sum of 15.000.000 CFA (23.000€) and food for 20 years.

According to the coordination team of the Samendeni Valley Integrated Development Program (PDIS), the Burkinabe government and its partners have respected the compensation protocol and have even gone far beyond what was planned.

“At the start of the project, the population census was 2.000 households. But when the project was implemented, this number doubled due to the return of migrants following the crisis in Côte d’Ivoire. As a result, we ended up with 4.000 households. In addition, villages that were supposed to be partially displaced were finally completely displaced. These various unforeseen events have had a great impact on costs” says Mr. Edgard Zombré, who is in charge of the infrastructure component of the PDIS.

Despite these unforeseen events, PDIS has succeeded in respecting its terms of reference for the resettlement of displaced populations and accompanying measures.

The compensation for the cultivated land, the houses and the moral prejudice suffered have been paid. The housing plots on the reception site have been granted and soon each household will have its own land title for about 18 billion CFA (16.800.000€). In addition, community socio-educational and health infrastructures at a cost of more than 11 billion CFA (16.800.000€) have been built on the sites. These include boreholes, health centers, schools, water towers, rural roads, and more.

If the State has respected its share, why are the populations complaining?

According to Mr. Aboubacar Gnamou, in charge of monitoring and evaluation of the PDIS, this crisis between the PDIS and the displaced populations is due to the interference of certain outside parties. “Some associations have made these people understand that we must compensate them for more than 15 million CFA (23.000€) per household. Nowhere in our documents is this foreseen. We presented models of houses that the populations could build with the compensation received. But in no case was it foreseen that the PDIS would build these buildings for them.  In short, none of the promises made by the people that have not been kept have any basis.

The real problem therefore stems from the poor management of the compensation received by the beneficiaries. Despite the numerous sensitizations carried out by the PDIS to accompany them, many have unfortunately squandered their money instead of buying land or investing in their housing or undertaking conversion activities as planned.

The proof is that when they are asked what additional assistance they need; they simply ask for money.

In sum, it is important to remember that you can never please everyone and that nothing is achieved without sacrifice or risk. Yes, it is certain that the displacement of populations is not without damage and the PDIS had some shortcomings.  But seeing the added value that the development of the Samendeni dam will bring to the development of Burkina Faso, we can say that the sacrifice and the risks are worth it.

by Miriam S. Onadia, original articles on Burkina 24 and Ouest-Info.