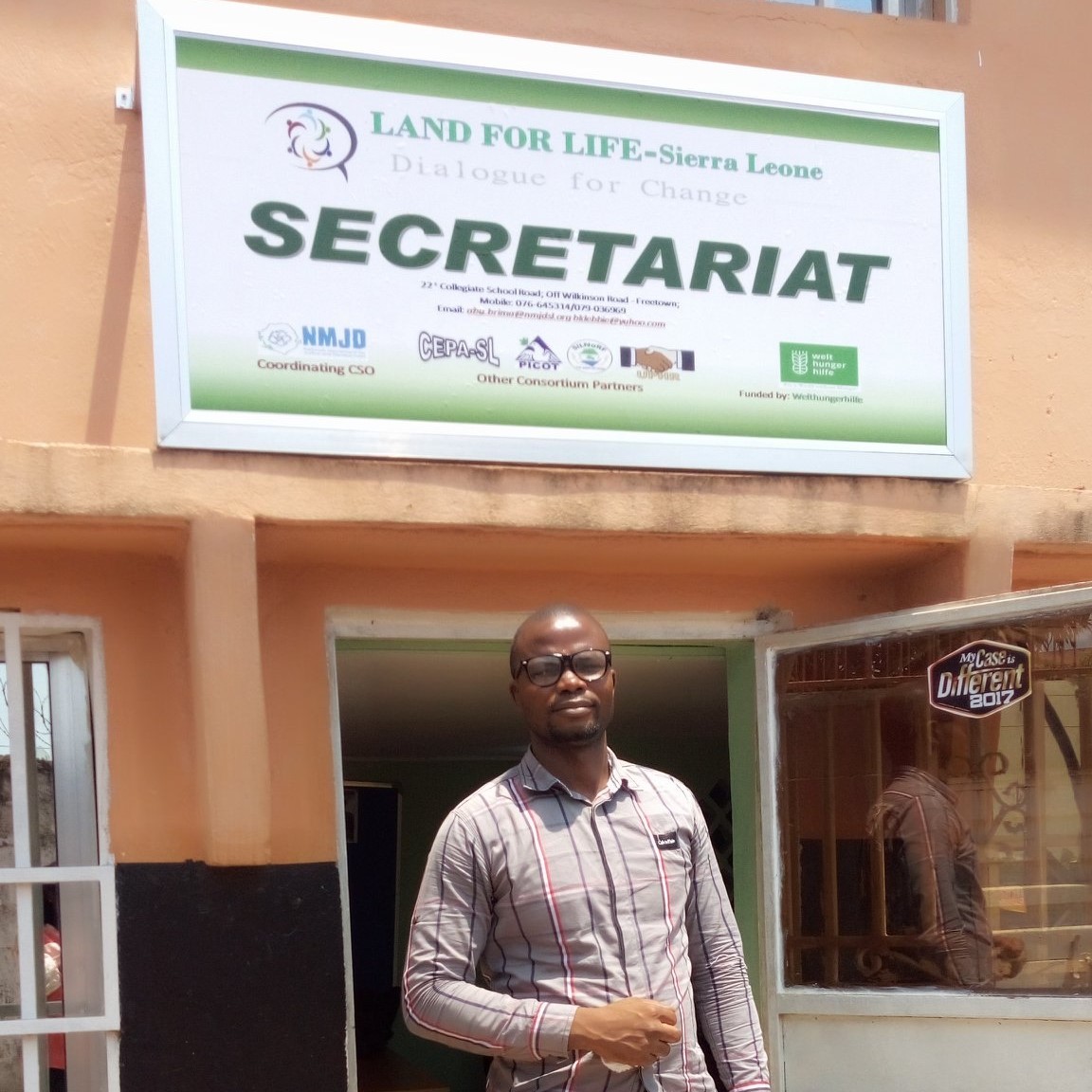 Berns,  National Coordinator of the Multi-Actor Partnership (MAP-MSP) Land for Life Sierra Leone, talks about himself and his participation in Land Collaborative’s first learning cycle on MSP and private sector engagement for Responsible Agriculture Investment.

“In my home district, in my younger days, we picked and sold diamonds; we had a lot in those days but then, one day a large-scale company came and took our land, relocated us and now mining the diamonds”, remembers Berns.

Berns grew up in Sierra Leone’s diamond mining district of Kono, which has in its soil some of the most valuable diamonds on the planet.  Kono is also known for its richness in Kimber pipes and dykes, as well as fertile soil for cash crops like cacao, coffee, cola nut, plantain, and oil palm.

In the beginning, the richness of natural resources in his district brought prosperity to Berns’ family, but between 1992 and 2002 Sierra Leone lived a most brutal civil war, which resulted in some 70,000 casualties and 2.6 million displaced people, according to UNDP estimates.

After the war, with a stabilized economy, the country has attracted a number of investors from the private sector; as a result, large-scale mining and agricultural industries have been set up throughout the country; for such development, there has been a surge of land conflicts related to environmental issues, family relocation, and a lack of transparency.

“We were all relocated, my father’s house was relocated by a company that is now mining the Kimber diamonds and my dad was left with nothing until his death”, Berns recalls.

Living in the midst of this context, Berns became an agitator, a young activist who participated in several strikes and demonstrations until around 2016, when he became part of the Network Movement for Justice and Development -NMJD-, a national human rights-oriented civil society development and advocacy organization. “Instead of throwing stones, blockading roads, or attacking miners, I started to use radio stations, newspapers, policy briefs, and community empowerment: They [NMJD] trained me to advocate”, he says.

Several advancements have been made in Sierra Leone for the implementation of Responsible Agricultural Investment (RAI) – a set of criteria that include the recognition of the communities’ rights of land and natural resources, transparency of land acquisition processes, and environmentally sustainable investments. In 2014, for example, the country committed to implementing the United Nations Voluntary Guidelines on the Responsible Governance of tenure of land, fisheries, and forests (VGGT). In 2015, FAO supported the creation of a Technical Working Group on RAI, and the formulation of Sierra Leone’s first ‘comprehensive’ National Land Policy.  The transformation of this policy into a Customary Lands Act of 2021 is already underway.

With this work as a precedent, different international cooperation organizations started to support CSO and motivate the creation of national multi-stakeholder platforms, among them the German organization Welthungerhilfe (WHH), which started supporting the alliance of civil society organizations (CSOs) focused on people-centered land governance through the  Land for Life initiative.  “We don’t have a typical land governance advocacy structure in Sierra Leone and that is why we want Land for Life to take that space; to be an exclusive land-focused organization that talks about land governance, land administration, reforms, policies and implementation, and also community involvement”, says Berns.

The Land for Life initiative has supported since 2018 a partnership between NMJD, the lead partner, and five other CSOs from diverse regions of Sierra Leone focused on people-centered land governance, such as United for the Protection of Human Rights (UPHR), Community Empowerment for Poverty Alleviation (CEPA), Partners Initiative for Conflict Transformation (PICOT), and Sierra Leone Network on the Right to Food (SiLNoRF).

Beyond the joint advocacy work at the national level, those five organizations have facilitated the formation and strengthening of multi-actor dialogue, as well as collaboration on land governance and investments at a decentralized level. These efforts are reflected in the initiation of inclusive community-land committees in 40 communities and multi-actor land platforms in 12 Chiefdoms and 4 districts of the country.

For Berns, this Multi-Actor Partnership has been fundamental “We need to work with all the actors, under an inclusive structure, to inculcate a culture of common understanding, tolerance, and collective leadership. By engaging and talking frequently, we are promoting dialogue for change”.

As the project manager of NMJD, Berns gives backstopping support to marginalized landowners and other vulnerable people affected by land-based investment activities in different communities in Sierra Leona. He also facilitates technical meetings with all the Land for Life CSO partners and does professional mediation when there is a conflict between communities and investments. “When it comes to situations that are sensitive, especially dealing with multinational companies, it requires significant backstopping intervention of the Secretariat, which I do provide”, says Berns.

Precisely because of the mediating role that Berns plays, he found quite timely the invitation to be part of the learning cycle on MSP/MAP and private sector engagement for Responsible Agriculture organized by Land Collaborative.

Land Collaborative is a global community of practice for land governance people-centered Multi-Stakeholder Platforms. Welthungerhilfe and Land for Life are co-conveners, together with other organizations such as the Mekong Region Land Governance (MRLG) and the International Land Coalition (ILC).

The learning cycle, which is facilitated by The Natural Resources Institute (NRI) of Greenwich University, started in March 2021 and will end in November of the same year with the purpose of equipping MSPs/ MAPs in 12 countries (6 in Africa and 6 in Asia) to engage effectively with the private sector in promoting Responsible Agricultural Investment (RAI) through interactive learning sessions and issue-based learning sessions.

This cycle of learning has allowed Berns, even now, to better deal with conflict mediation scenarios between communities and private companies: “This cycle has enabled me now to actually come closer this negotiation context with private sector investments than ever before; also, what is notable is learning that the private sector is motivated by some factors and indicators that other actors, especially those in CSO, need to learn about”, Berns concludes.

Press Statement: Calling on the Government to Adhere to the VGGT Principles and Uphold Transparency in the Implementation of the Proposed Chinese Funded USD 55m Fish Harbour Project

Decentralization of the MAP into Hauts-Bassins, Burkina Faso